Having finally said goodbye to rainy Sundays Winchmore Hill hosted the Pelicans at what must be one of the most beautiful grounds, after The Meadow that is.

Baaaaa Bang Baaaaa Bang, ah the sound of lambs to the slaughter.

Welcoming yet another Pelican legend back into the fold Tiger full of nostalgia and enthusiasm looked like he had never been away.

The Skipper made his way out to the wicket with the Winchmore Hill Skip, and with Clive’s words of wisdom ringing in his ears of “Bat first”, he duly lost the toss. Surprisingly Winchmore decided to bat first much to Clive’s annoyance.

As the teams headed out to do battle Adam and Skip took a bet, how long would it be until Clive said somebody would die on this wicket, in all fairness it didn’t look too bad so it would probably be sometime.

Up first Toobes steamed in, getting the ball to touch all of 35mph. Hasan opened from the other end, a touch faster than Toobes and dare I say slightly more accurate, Adam and Skip took first and second slip respectively. “Somebodys going to be killed on this wicket” muttered Clive who had been offered the wicket keeping duties – 8 minutes.

The bowling was tight from both ends and it didn’t take long for Toobes to take the first wicket which was caught expertly at first slip by Adam. Shortly after this Hasan from a cracking delivery sent the other opener packing, clean bowled.

First to finish his spell was Toobes who made way for Rags, first over: wicket! Up in the air and who was there to take the catch but none other than the legend that is Tiger.

Unfortunately this brought in the other Winchmore Hill bat who quite liked the idea of a bit of a tonk and with Fairweather taking over from Hasan it is fair to say that Rags and Adam suffered most at their hands. It was though amusing to see the look of indignation on Rags face as this young 14 year old carted him for 3 fours in one over.

Soon the world order was restored as first Rags saw the first batsman off with a fine catch by Hasan followed by his partner also going for the big hit and that being taken by Toobes. Rags finished with 3 for 51 off 8 overs.

Whilst Rags was being abused, Adam too took his fair share of punishment. Now there is an old cricket adage which is regularly used by old Skip that you don’t set your field for a bad ball. Whilst I agree with the sentiment from our Yoda lookalike I think there always is an exception to the rule and Adam is it. With the ball continuing to pepper the leg side of the crease the leg side was duly strengthened, and who should take the catch but Tiger?

This brought batsman number 7 out who next ball surprised by the one that pitched on the wicket and in line lobbed it straight back to Adam, a hat-rick beckoned.

Now I know that at this point it is customary to surround the batsman but fearing the possibility of somebody being killed on the wicket, the order of everybody take one pace forward only seemed sensible. A block by the batsman was a win-win for all.

With Adam finishing his spell and Rags also taking his leave, Niron and Tiger came in to twirl some magic and try and halt a steady run effort which was pushing beyond 130 with plenty of overs left.

Thankfully Tiger displaying all the giving of a Scotsman with all the generosity stripped out of him returned figures of 6 overs for only 8 runs, Niron also showing Yorkshire generosity returned excellent figures of 7 overs 1 for 23. That one wicket caught by, take a guess, the omnipresent Tiger.

Hasan finished with a two over cameo and Winchmore Hill returned to the clubhouse with 158 runs on the board.

Tea, a delightful affair, was taken and a batting order ready.

Opening for the Pelicans were Asad and Clive.

Now it is customary to regale you with stories of Pelican collapses, of run outs and other such mindless attempts to lose a game, but other than the running between the wicket by our two heroes which at times resembled two handicapped snails on Mogadon, Asad smashed 106 and Clive sweated and spitted his way to 42.

It was a truly heroic effort by the openers, with one Asad 6 which if it hadn’t hit the trees would have ended up just this side of the Meadow.

Special call out to the Iceman who sat stoically with his pads on to the bitter end, Sudocrem for the pad rash. 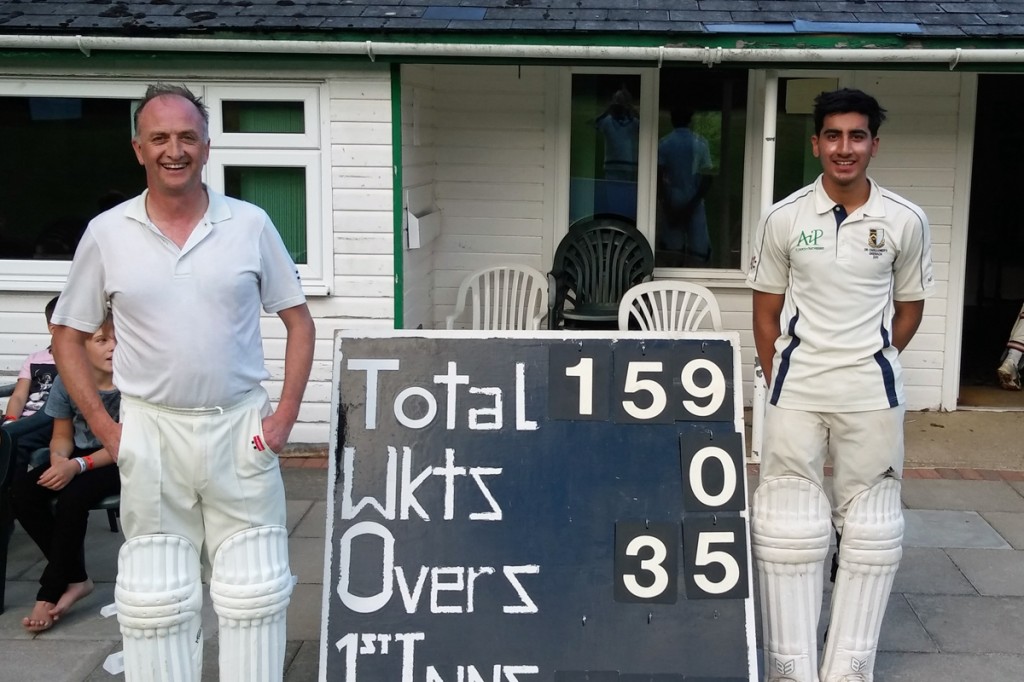 Reports are intended to convey an entertaining picture of the day’s play. No disrespect is meant, but if on occasion we misjudge matters, please take it in the friendly and humorous spirit in which it is intended.